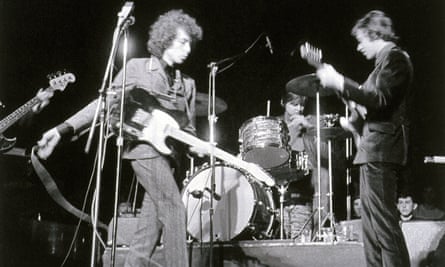 RRecently, Chan Marshall was driving to a rehearsal studio in Los Angeles. It was days before she traveled to Europe for a series of dates that includes a night at the Royal Albert Hall, recreating the infamous Bob Dylan show from 1966: the one where he played electric and a member of the crowd shouted, “Judas! While driving, she listened to the setlist: Visions of Johanna, It’s All Over Now, Baby Blue, Desolation Row.

Near the studio, Marshall – AKA Cat Power – glanced in his rear view mirror and saw his ex-boyfriend in the same line of traffic. “One lane down, two or three cars back, in a fancy car, on her phone,” she says now. It had been years since their acrimonious breakup and she had long felt a lack of closure. That day, however, driving in the sun, listening to Dylan, she was struck by how little animosity she felt. “I had love and kindness in my heart for that person, which is a really good feeling after carrying that ugly shit around for so long.”

He got closer. She drove slowly, raised her sunglasses, intending to smile at him. Just Like a Woman appeared. Marshall sings the lyrics: “‘And if we meet again, introduced by friends…'” It seemed appropriate. “And he walks away, and I smile, and he doesn’t see me.” Instead, the van in front suddenly brakes. Marshall brakes. His things wobble on the floor. The van continues and Marshall drives again, picking up speed.

She sees children playing at the school where she hopes to send her son and suddenly the world seems to be slowing down. “I stop and the tears come,” she says. “But these are not tears of pain, these are tears of absolution.” The scent of bougainvillea wafts through her open window. The moment suddenly seems magical. “I was thanking God and I was thanking God Dylan,” she says. “Because it wouldn’t have happened to me if I hadn’t done that gig.”

Spending time with Marshall, 50, is getting used to this kind of anecdote – his conversation is unfiltered, conspiratorial, prone to detours and filled with fate, signs and predictions. Ask her how she’s doing and she’ll say “I’m madly in love!” “, will show you pictures of her boyfriend, tell you how a clairvoyant said she would meet him, that it would be an easy love. “Sorry,” she said, “I’m babbling, but I’m almost done.”

It’s early afternoon in Glasgow, and we’re drinking coffee in Marshall’s hotel room. She turned off the lamps and drew the heavy gray curtains. His two notebooks, one red, the other blue, gave way to a room service tray, loaded with coffee makers and bread. When the waitress returns with jam, Marshall thanks her in Polish, then lights the first of many cigarettes, the smoke billowing as she sits in a chambray jumpsuit, hair up, heavy eyeliner freshly drawn.

Written, the car anecdote seems meandering and half-consequential, but Marshall tells it with unexpected urgency and beauty. It’s a remarkable skill, one that has propelled his 30-year career: an unrivaled ability to charge even the simplest lines with emotion and color. The lyrics on his 2018 album, Wanderer, were as understated and straightforward as they were on his 1995 debut, Dear Sir, but their recordings were lovely. Famously, one of her first gigs saw her standing on stage in a New York bar, playing a chord on a two-string guitar and repeating the word “no” for 15 minutes. Part of it is his dark, sacred voice. But it is also his intimate understanding of sound and space. In person and live, Marshall is filled with nervous energy, relentlessly moving around the stage, muttering thanks to the audience, worrying about the lights. Then she sings, and something immobilizes her.

This gift made Marshall an accomplished performer. Earlier this year, she released Covers, her 11th album and third collection of covers, following Jukebox in 2008 and The Covers Record in 2000. As she flipped through songs by Iggy Pop, Nick Cave and Lana Del Rey, the record proved a masterclass in phrasing, a lesson in what she omits and includes.

“When I want to do a song, usually the only reason I play it or record it is just because I like the song and want to hear it,” she says. That’s the only real light Marshall can shed on his approach. When she reinterpreted Rihanna’s Stay for Jukebox, cutting down the verses, distilling the song down to its essence, it was simply because she heard it in a cab as she drove through Miami. “And I just started crying. Something in my life at that time [meant] I needed to hear this song. I had just had my son and one of my best friends visit from New York, and I found a babysitter and we went to a karaoke place and I played there 16 or 18 times, again and again.

Jukebox also includes her version of Dylan’s 1979 track I Believe in You (she took the liberty of changing a few lines). She can’t remember the first time she heard his music, but throughout her youth in the southern United States, where her traveling family was often separated, he always seemed to be there, cutting through the “sound majesty” of Beatles records. , his mother’s Ziggy Stardust phase, his father’s blues records and his grandmother’s George Jones, hymns and Johnny Cash.

Her music, she says, was “like a slow train coming. He was like Santa Claus or Father Time, an ingredient in my life. And there was something that really reminded me of the church with Bob, the elegance of the prose, the poetry. I thought it was easy to understand, it felt like reading a newspaper. I always liked him.

As she entered her teens, Dylan suddenly focused. “There was no one else,” she said. “Patti [Smith] once said it, when I was hanging out with her a long time ago, ‘Bob, he’s like my boyfriend.’ He was her boyfriend, in her mind. And that’s kind of what happened to me. »

The Royal Albert Hall show will recreate the erroneously titled Contraband recording which was made at the Manchester Free Trade Hall in the spring of 1966, resurfaced several years after the event and officially released in 1998. The first half is an acoustic set and the second played electric. It marked the pivotal moment in Dylan’s career when he turned away from his folk roots, infuriating some of his audience.

For Marshall, there is something sacred in this moment. “There’s all the folk loyalists, and then this kid comes along, this Beat poet, and starts putting something rock ‘n’ roll in something that shouldn’t be touched. It changes the course of music history and informs everything.

She is keen to sing this performance as directly as possible, and not reinterpret the songs, as she often would. “It’s important for me not to do my thing,” she says, then clarifies. “I am not Bob, not at all. I don’t know how to describe it – I’m just recreating it, that’s all. But not make it mine. I had the idea that I had to protect that period of time and he was doing that crossover. It’s like that precipice of time that changed music forever.

There is also something sacred in the Royal Albert Hall for Marshall. She compares it to the Vatican, or to “an old mosque or a place of life like a cathedral”. She first saw it in DA Pennebaker’s 1967 documentary about Dylan, Don’t Look Back, and whenever she was in London she visited but never set foot there. inside. “My heart is racing, I’m terrified,” she said of Saturday’s show, fiddling with the brass-colored buttons of her jumpsuit. “It’s not like, ‘Oh what’s Bob going to think?’ It’s like, ‘what am I doing? Am I doing something good?’ She exhales and presses her palm to her chest, “I’m going to cry.”

Marshall has met Dylan twice. The first time was backstage at her show in Paris. She had found out a week before that she would be meeting him, and immediately grabbed a notepad and wrote what would become Song to Bobby: “‘I want to tell you / I always wanted to tell you / But I didn’t ever had a chance to say…'” she sings now. When they met, he was full of questions. “‘Are you here recording? Are you on tour? Got the band with you? Only you? He already knew me,” she said, still a little awestruck. “I was like, ‘I wrote a song for you!’ And he’s like, ‘I want to hear it!’ So I sent it, but never got a response.

The second time was the day before we met in Glasgow. Dylan is also playing in town and the couple are staying at the same hotel. So she was at the bar, a good martini less, when he and his retinue arrived. “It’s Chan!” ” she told him. “Chan Marshall! (They spoke briefly and he put her on the guest list for the next night’s show.)

Between these two encounters came the time when she was invited to meet him after his show in Pasadena, but somehow she didn’t. It’s another long anecdote, once again filled with hijackings and double backs and a dodgy ex, who insists they’re leaving the show just as Dylan launches I Believe in You. They reach the car as Dylan hits the second verse, and Marshall refuses to come in so she can hear him sing. “And I just wait, and I listen,” she says, and through the smoke she beams. “He changes the lyrics – he changes the lyrics to the one I sang.”